Hold on to your hats! The goal here was to try to capture some of the motion of New York City in a still image. As easy as that might sound, depending on your technique, it can be a bit tricky to pull off. Read on to see how I was able to capture these photos.

As you probably already know, Times Square in NYC is a busy place. You don’t need me to tell you that. Between the traffic, people, billboards, attractions, construction, and the hundreds of other things going on, it can be hard to focus on one thing in particular.

My family and I were spending the weekend in New York, and on this particular day we ended up in Times Square at night. I can remember that, at this particular point in time, we were just taking in the sights and trying to figure out where to head next. I noticed the traffic passing by us and thought to myself, ‘I wonder if I can capture any interesting photographs of the traffic?’ Challenge accepted!

After a few test photos, I found that I really didn’t need that long of a shutter speed to accomplish my goals. In fact, I used a 1/4th (0.25 s) shutter speed with a wide 2.7 f-stop for all of the photos in this set. It was actually quite difficult to keep at least one portion of the image in focus while the camera was moving, and also while trying to achieve some level of blurring in the rest of the image. Over time I fine-tuned my technique and was able to capture some pretty interesting photos. 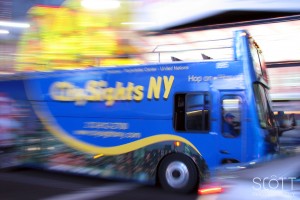 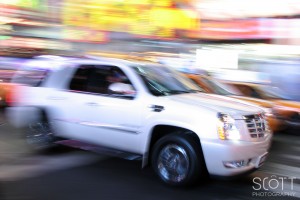 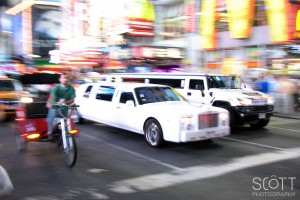 There’s something about these photos that I find mesmerizing. When I look at these images, I feel the sense of motion, yet am amazed that parts of the image remain in focus. What do you think? Let me know in the observations below.