The Moon, Venus, and Mars converged in the night sky on February 20th, 2015. I took the long journey to the parking lot behind my work for some front row seats to the spectacular show.

The temperatures dropped down into the single digits that night, but it was a balmy 15 degrees when I took these photos. Nonetheless, I am glad I was able to see and capture the show. If you look at the photos closely, you can see the phenomenon of Earthshine on the moon.

Venus and Mars were actually closer to each other on the night of February 21st. Southern New England had yet another winter storm, so I was unable to see them at their closest. Luckily, my area was spared of any real accumulating snow this time. The Moon would have been further away from the pair on the 21st also. Southern New England got lucky with clear skies on the 20th. 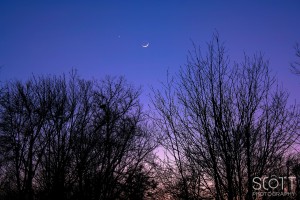 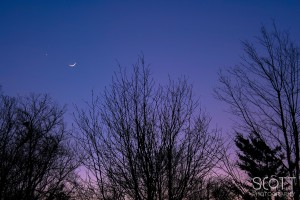 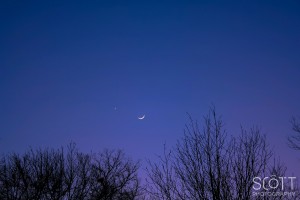 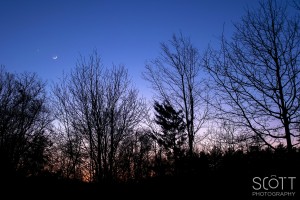 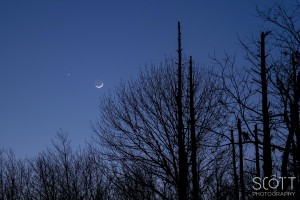 There are More Planetary Conjunctions to Come

If you missed this conjunction, you’ll have the opportunity to see a few more conjunctions in 2015:

On the night of July 1st, Venus and Jupiter will be extremely close in the sky (0.3 degrees apart). Look west just after sunset.

On the morning of October 28th, a rare 3 planet conjunction will happen between Venus, Mars, and Jupiter. They will form a 1 degree triangle in the morning sky. Look east just before sunrise.

On the morning of December 7th, the crescent Moon and Venus will come together in the east before sunrise. The pair will be about 2 degrees apart in the sky.

There are plenty of events happening in space on a daily basis. You just have to look up!

« Peaking at the Planets
Juno: Blizzard of 2015 Time-Lapse »